The History and Stories of Budapest’s Liberty Square 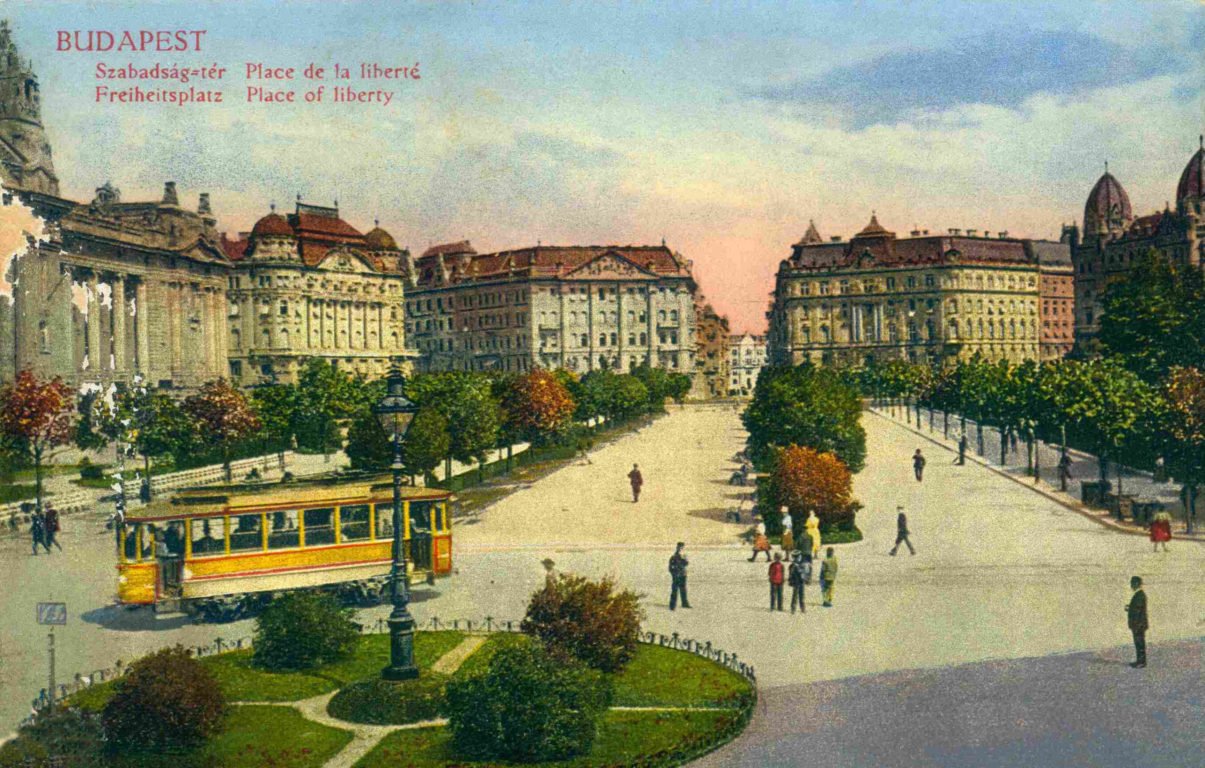 Nestled in the heart of Budapest, just three blocks from the waters of the Danube is a scenic square with a turbulent history. Today a visit to Liberty Square is one of the most interesting things to do in Budapest. Picturesque statues to freedom and liberty are nestled amongst shady walkways and grassy lawns throughout the square. But in the late 1800’s this was the scene of some of the most brutal oppression in Budapest history. The mix of scenery and history make this one of the must-see destinations when you visit Budapest. 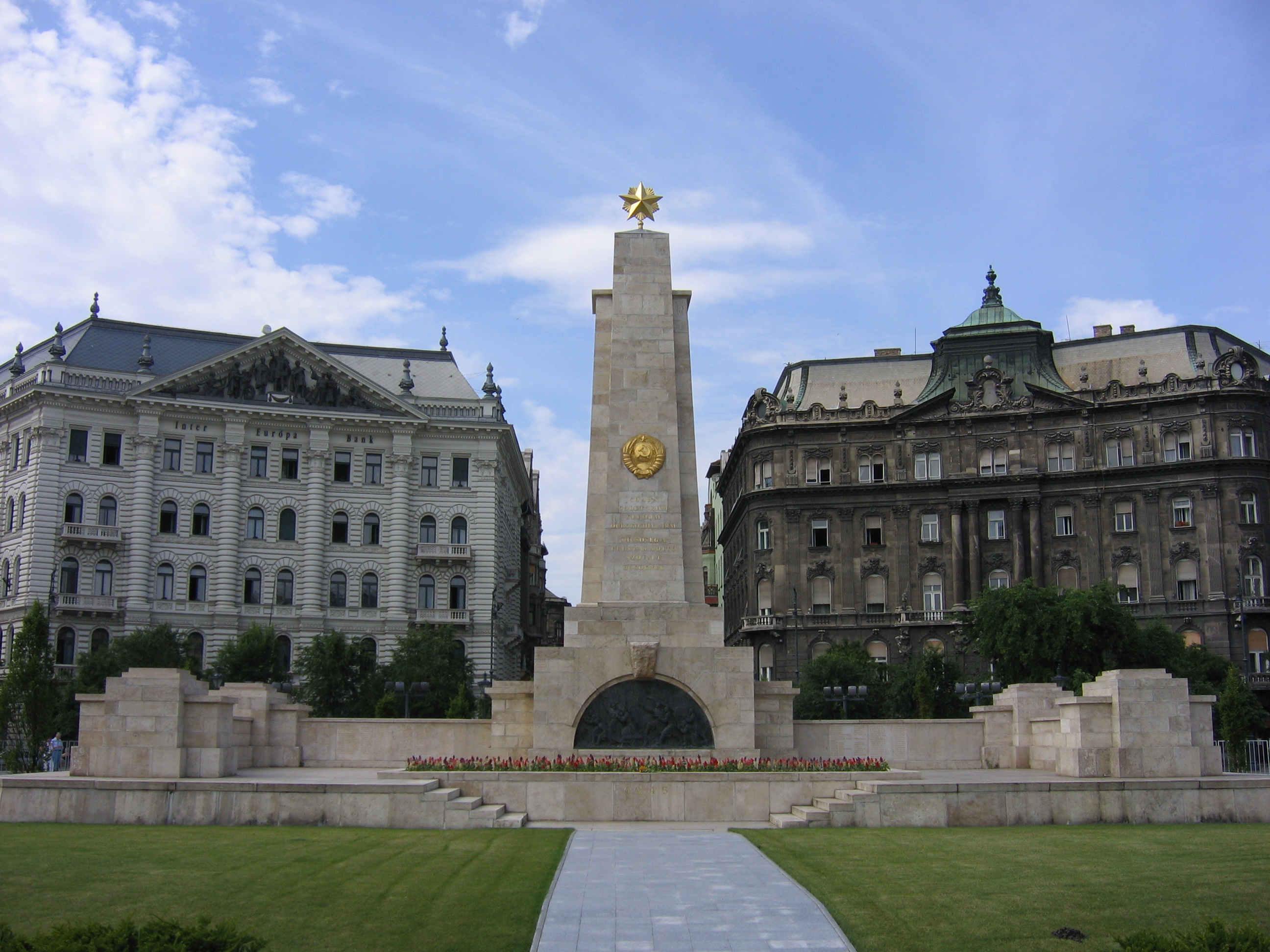 Liberty Square is in Budapest, the capital of Hungary and home to almost two million people. Budapest was originally a Celtic settlement with an ancient history. The Hungarians moved in during the ninth century and have had a tumultuous existence beginning with domination by the Roman Empire and being pillaged by the Mongols and continuing through world wars and Communist revolutions. The plot of land has, obviously, seen all of this, but it only became “Liberty Square” recently.

In 1786, a massive troop barracks was built on the location by the Austrians. The barracks would go on to play a bloody role in the struggle for Hungarian independence from the Hapsburg dynasty. Many Hungarians were imprisoned and executed at the barracks, including a Prime Minister. After the Austria-Hungary Compromise in 1867, plans were made to demolish the barracks which were finally completed in 1897 when room was made for the square.

During the 20th Century, the square was the scene of protest and revolution and war. It became a monument to communist liberation (and is still the home to the last remaining communist statue) as well as a symbol of freedom from communism in the form of a statue of American President Ronald Reagan. The square itself is a part of, and symbolic of, the history of Hungary and Budapest over the last 250 years.

What to See Liberty Square: 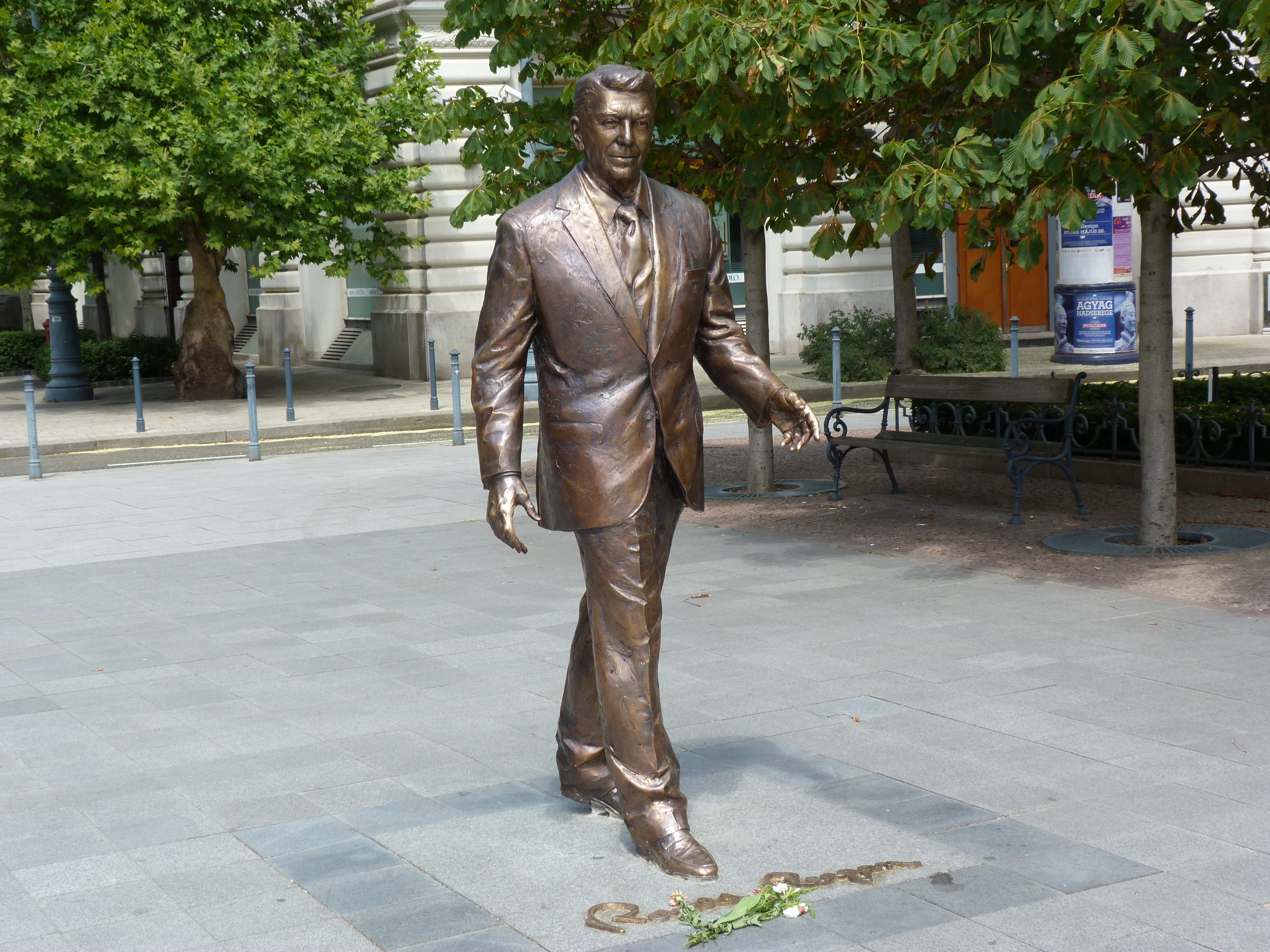 Ronald Reagan is honored in the square for his contribution to ending the Cold War and subsequently freeing Hungary from the Soviet Union. Reagan gave the famous speech calling on Mikhail Gorbachev to tear down the Berlin wall. He took a firm stance against the Soviet Union which helped lead to the eventual collapse. The monument looks out over the World War II memorial to fallen Soviet Soldiers.

Even though the Hungarians eventually saw the Soviets as people they needed liberty from, at one time the Soviets were the liberators. During World War II the Soviets fought to liberate Hungary from Nazi conquest. This is the last remaining Soviet memorial and is well worth a visit, especially since many Hungarians dislike it and it might not last forever. The memorial is large and dominates one end of the square, the Soviet hammer and sickle still clearly visible. 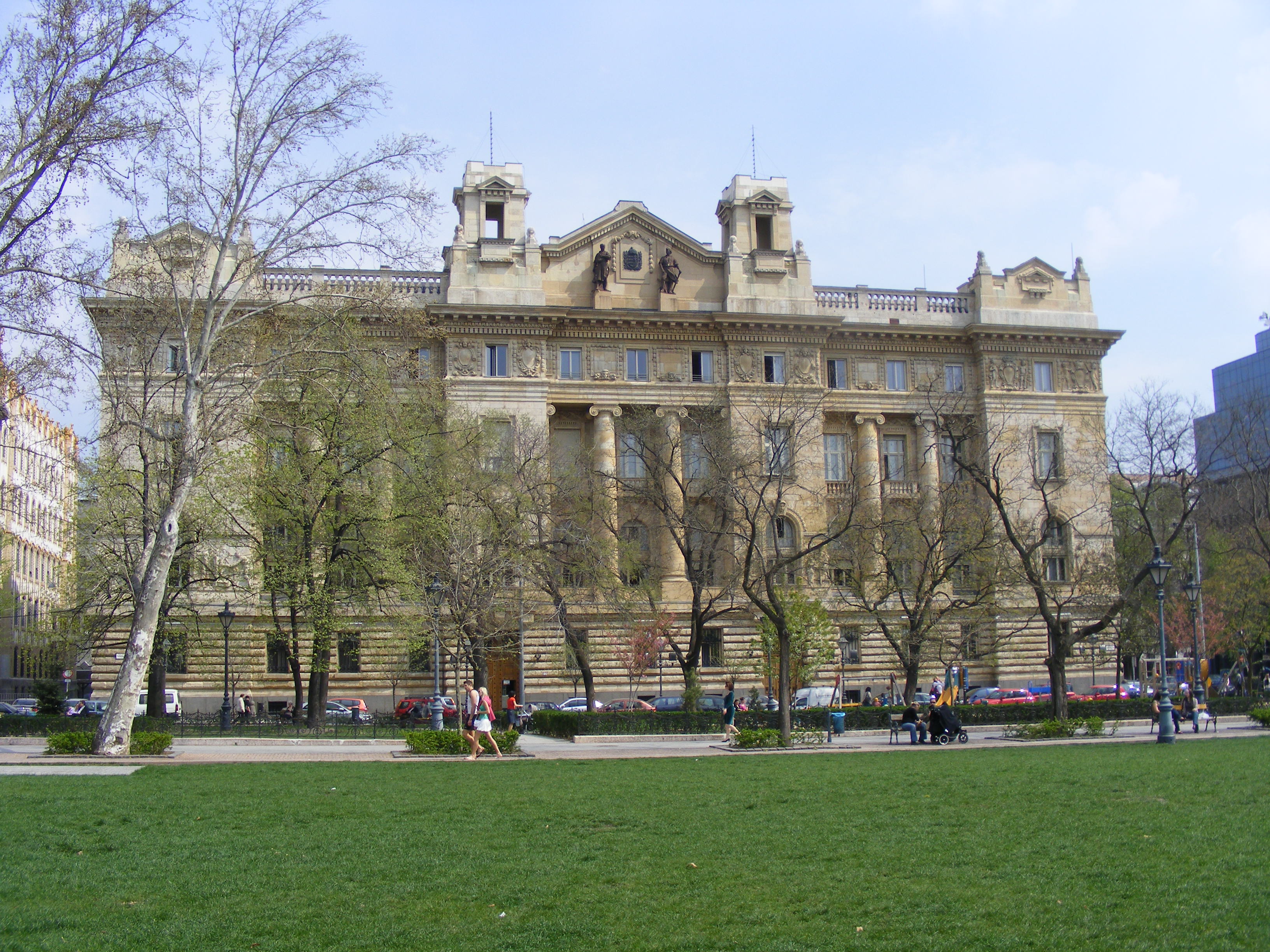 Located on the eastern side of the square is the Magyar Nemzetí Bank or the Hungarian National Bank. A symbol of emerging free markets and capitalism in Hungary, the bank is responsible for the money of the nation as well as attempting to control inflation and keep interest rates in check. While this might not be of interest to a traveler beyond the exchange rate, the architecture of the building will. The imposing façade is built in the late classical style and depicts various elements of commerce, exchange, and money in limestone relief.

This is definitely a place of interest for any American travelers who might need help with their passports or other issues. It is also a unique piece of architecture. Home to delegates and diplomats from the United States since 1935, this was originally the Hungarian Hall of Commerce. The Embassy was built in 1900.

The Western side of the square is dominated by the Stock Exchange Building. Designed by a Hungarian architect Ignác Alpár, this building was turned into the Hungarian television studio after the Soviets captured Budapest in 1948 and shut down the Stock Exchange. It has a matching building across the square, both built in the neoclassical style. Alpar is also famous for designing the Vajdahunyad Castle. This is a particularly distinct building as its entrance has two huge towers.

The Monument of German Occupation – 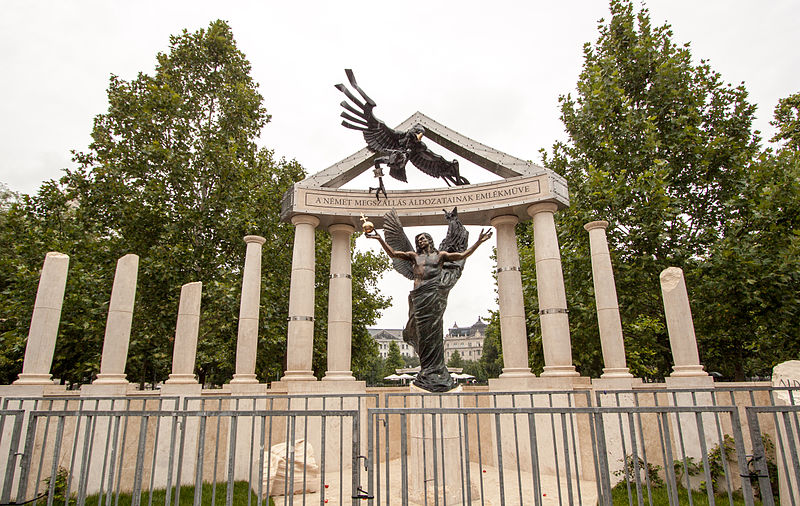 Life was difficult for the residents of Budapest during the German occupation during World War II. This monument is a reminder of those difficulties, and of those who lost their lives to the Nazis. It is definitely worth seeing if you visit Budapest. 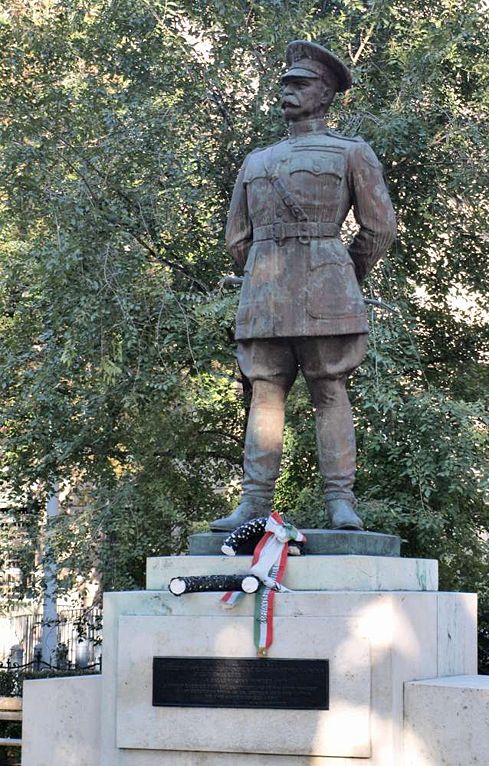 The statue of the US General is the man, in uniform, holding his infamous riding crop. Legend has it that the general beat off Romanian thieves as they tried to loot and pillage the Budapest museum. Dedicated in 1936, the statue is a point of contention between the Hungarians and the Romanians. The actual riding crop is now on display at the museum Bandholtz defended.

Other Sites of Interest –

The square is a mix of historical, commercial, and residential. There are also several restaurants, like the Hutte Café Terrace directly in the center of the square. Complete with waterworks, fountains, walkways, and monuments throughout. There are play areas for kids, and if you come at the right time, you might find an exciting concert or festival in progress.

When visiting a place like Hungary, there are numerous points of interest that can draw in tourists. Simply put, there are plenty of things to do in Budapest. But there might be no better way to truly take in the city than by spending some serious time in a place like Liberty Square. Instead of running through and chaotically snapping pictures just to prove you were there, consider slowing down and taking a stroll. Take time to consider Budapest history. Examine the detail of the stunning architecture in the buildings around you. Breathe the fresh air of the Danube while relaxing in a café. Liberty Square is Budapest in a nutshell. Consider spending some time here when you visit Budapest. To explore Budapest in person, join us on the Original Free Budapest Walking Tour, or check out one of our Private Group Tours.